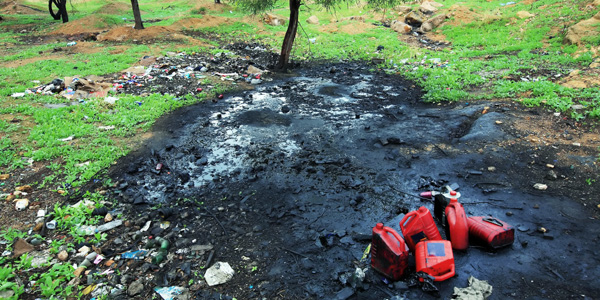 Oil spills as a result of domestic oil tank leaks or kerosene spills are common place. Rusty oil tanks or leaking boilers can result in kerosene spills on concrete, grass and soil. S-200 OilGone can fix these problems.

These spills can be caused either by the refilling of tanks or as the result of leaks. Very often old metal tanks corrode and start leaking oil onto the ground around the tank. Also, the tanks themselves become covered in dried hydrocarbons and become significantly discoloured, even black. Spilt oil can seep into the ground, damaging the concrete or contaminating the soil around the tank., killing grass and plant life. If this leak is not dealt with, the contamination can seriously damage the concrete foundation of the oil tank, or seep down into the water table or into a neighbour’s property.

Any such contamination has to be treated as it will be considered an environmental hazard, or will complicate any potential sale of the property.

This green technology  is used for the remediation of hydrocarbon spills or leaks. It is made from completely natural products – the base product being fish oil – is inert and non-toxic.

Within a couple of minutes of being sprayed on the contaminated soil, the hydrocarbon spill and the S-200 OilGone Liquid start to bond and the liquid on the ground starts to turn a milky white. What has happened is that the hydrocarbon has been absorbed by or encapsulated inside the S-200 OilGone Liquid – taken inside the matrix – and the process of breaking down the diesel has already started. It is important to keep the soil moist to allow optimum bioremediation conditions and to turn the soil after approximately one week.

Trapped inside the matrix with the hydrocarbons are microbes – microorganisms that exist in oxygen in the air – that will eat the oil The inside of the matrix is like a greenhouse, which helps the microbes to multiple at many times the normal rate, and therefore the process of breaking down the oil into its constituent parts – CO2 and H2O – will also happen at many times the normal rate. The matrix with the hydrocarbon inside will continue to work until all of the oil has been remediated.

S-200 OIlGone Liquid has proved to be a means of almost complete bioremediation, with success rates of up to 99.99%. The following case studies explain the background to the spills, the process for remediation and the laboratory test results illustrating the almost 100% remediation of the contaminated soil and concrete.

When: November  2011
Where: Drogheda, Ireland

When: June 2016
Where: Drogheda, Ireland

Contact us for a free consultation
We use cookies to ensure that we give you the best experience on our website. If you continue to use this site we will assume that you are happy with this.OK