PRP Booms Bioremediate 99% of Hydrocarbons in an Interceptor Tank

A very strong odour of spilled fuel was evident around the interceptors. All three chambers in the unit contained varying  levels of oil. As the interceptors captured the runoff oil spills from throughout the depot complex, the likely oil contaminants were mostly identified as a combination of diesel, kerosene heating oil and vehicle hydraulic oil spills.

Particular attention was given to Chambers 2 and 3. Chamber 2 had a high level of thick oil gathered within. Chamber 3, the clean water exit chamber actually contained a significant level of contamination.

Samples were taken from Chamber 2 and sent by courier to BioSearch Limited, an  independent analytical laboratory. The results showed PPM levels at 29,900.

Based on the dimensions of the tank and the estimated volume of hydrocarbon, a 3 metre PRP Bio-Boom was inserted into Chamber 2 and attached to the grid cover allowing ease of access.

The PRP applied to the surface of the liquid acted as a catalyst, kick-starting the bioremediation process. The Bio-Boom would continue this process and remediate the rest of the hydrocarbon in the chamber, along with any future in-flows of hydrocarbon during the course of the trial.

Petroleum Remediation  Product (PRP) is an organic bioremediation accelerator consisting of tiny spheres of treated beeswax. Developed by a NASA Technology spin-off company, PRP® Powder was nominated to the NASA Hall of Fame.

When PRP comes in contact with spilt oil, it “adsorbs” the hydrocarbons inside of the nanospheres. Once inside the PRP spheres, the hydrocarbons are no longer sticky or able to interact with surrounding wildlife, plants and property, and will never be able to enter the water table. Nutrients in the sphere help microorganisms from the immediate environment flourish until they eat every droplet of oil. PRP® will absorb and remediate, over time, 10 to 20 times its weight in hydrocarbo

How Effective was the PRP Boom?

We revisited the site three months later.  The first obvious difference on approaching the unit was the lack of any odour. It had been fairly overwhelming in August, now in October there was none.

On examining Chamber 2, clear water could be seen within the same chamber that had originally being filled with stagnant oil. In addition Chamber 3 now only contained clear water also.

A sample of the water within  Chamber 2 was taken and sent for analysis to BioSearch  Limited, an independent analytical laboratory. PPM had fallen to 86, from 29,900, a fall of over 99.9%

PPM Levels in Only Three Months 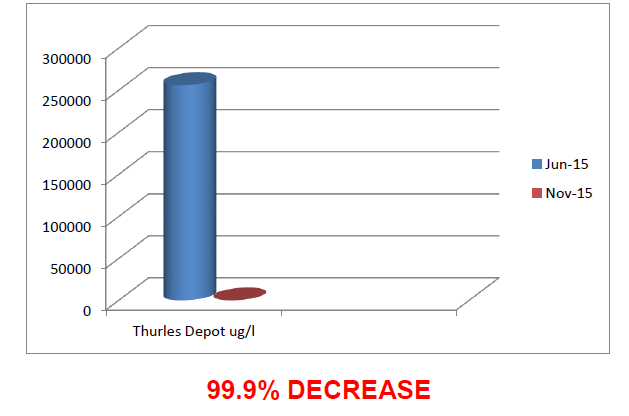 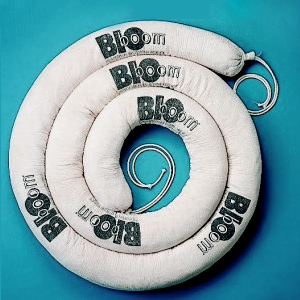 PRP can be purchased in loose powder form or in a boom form (1m,2m and 3m lengths) or in a well boom format (weighted so that it stands vertically in liquid). 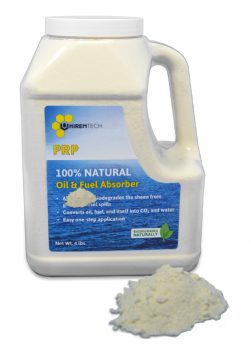